Los Angeles, CA (The Hollywood Times) 2/20/20- Dana Richie’s new award-winning film, Gateway is gaining momentum. “The idea for Gateway came from a national movement called Choices Matter, which aims to educate people about non-opioid options available to manage pain after surgery. They came to me initially asking for short-form content around patient stories; however, after our first shoot in Maryland, we knew this was going to be a bigger project. The organic nature of this film was very special.- Dana Richie

You don’t just tell stories, you continuously find innovative ways to bring stories alive. Tell us about your creative process.

Dana Richie: Storytelling is my passion. Ever since I can remember, I was creating fictional characters and telling stories to anyone who would listen. Family members, friends, even teachers. That process solidified my desire to tell all kinds of stories, so when I accepted my first job as a news print reporter in Houston, Texas, I quickly learned that everyone has a story to tell. This made me very interested in non-fictional stories too. As I continued to interview people telling true-life stories and took a deeper dive into their journeys, I realized that no two stories are ever the same, and telling those stories should be approached with an innovative attitude and customized care.

When did you get your first break?

Dana Richie: I got my first break after college when I landed a role at CNN in Atlanta as an entry-level “Video Journalist”. They had us running the TelePrompter live for the anchors and even live studio camera! It was a trial-by-fire education and I learned a lot. I was able to learn the ins and outs of television production and continued to hone my storytelling skills.

What is it about the entertainment business that intrigues you the most?

Dana Richie: What intrigues me about the entertainment industry is the incredible opportunity that I get to interact with so many creative people who share the same love of storytelling. I’m also fascinated by how fast the industry is changing and how much progress is being made from linear to non-linear formats of storytelling that have an extraordinary reach and remarkable speed of content consumption.

Tell us a bit about your diverse background.

Dana Richie: Since I love telling all kinds of stories, I find that formats have no boundaries. A series, a commercial, a documentary, a scripted show… all are challenging and exciting formats in which to tell stories that can have impact and rally the audience engagement. I especially like it when someone walks away with an emotional response to my content, always a great feeling.

You are an award-winning filmmaker and producer. What are you most proud of? 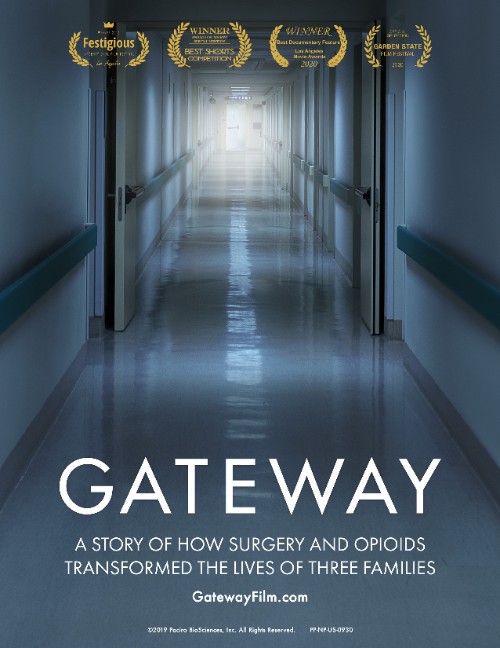 Dana Richie: I’m very proud of my debut documentary, Gateway, which premiered October 2019 and explores the opioid epidemic through the eyes of three families who have battled addiction following surgery. As a new filmmaker, it’s been a humbling and incredible experience to share the emotional stories of these documentary participants in an authentic way that best represents their struggles, hope, and truth. I’m looking forward to telling more stories that are just as heartfelt and impactful. Directing and producing Gateway was a real labor of love and a great team collaborative effort.

Tell us about MUSIC FIRST.

Dana Richie: Music First is a scripted sitcom I’m developing and producing about my days as a VH1 News producer. It’s set in the early 2000s in an MTV-style music newsroom and I’m collaborating with Brian Graden Media on the project. (Brian ran MTV & VH1 for over a decade). I’m currently co-writing the pilot. Expect an announcement on this project soon!

Tell us about your new film, Gateway. Why is this so special to you?

Dana Richie: The idea for Gateway came from a national movement called Choices Matter, which aims to educate people about non-opioid options available to manage pain after surgery. They came to me initially asking for short-form content around patient stories; however, after our first shoot in Maryland, we knew this was going to be a bigger project. The organic nature of this film was very special.

Gateway ended up being a 40-minute short documentary that follows the lives of three families impacted by the opioid epidemic. We follow a mom who got addicted to opioids after a C-section, a doctor who doesn’t prescribe opioids anymore, another mom who lost her son to opioids at the age of 18, and a young woman who has been struggling with opioid addiction. Gateway is special to me because of the special people who are in it and all of the special friends I made along the way. It’s also special since it’s my debut documentary.

Share some of your awards for Gateway. What are a couple of points that you want the audience to know?

Gateway has won the following awards: 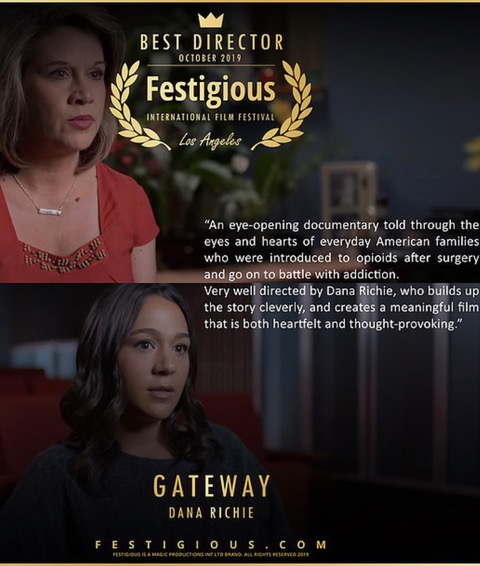 What’s next for you?

Dana Richie: Next up is a mini-documentary in association with Bards of Nevermore about the San Francisco Gay Men’s Chorus.